This mod will bring a sort of hair progression into the game that makes your Sims' hair grow naturally, almost organically. You can maintain their hair length by making sure you send your Sims off to the Salon (Business Hours: Monday - Saturday, 06:00AM - 06:00PM) for a haircut once it reaches "Overgrown hair" status or you can let it grow out after 6 Sim Days has passed. Once your Sim's hair has grown out, the Sim will default to the next hair length unless they get another haircut before it becomes "Overgrown" again.

Included in this mod is the beginnings of additional gameplay toward your Sim's hair. We've included the ability to get your Sim's hair dyed permanently or temporarily!

Temporary Dye last 2 days before needing a Touch-Up at a mirror and a quick rinse. 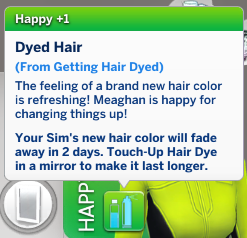 Permanent Dye last until your Sim's hair grows out to the next length or they get a haircut. 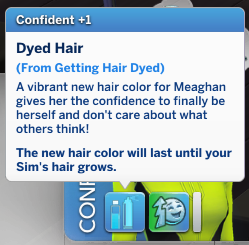 Do I need to activate this mod for it to work?

No, as soon as you load up a save this hair progression takes place. No action required.

Does this mod affect the hair of non-active Households?

Your non-active Households' hair will remain maintained without your intervention. You will have to play the Household in order for their hair to grow with this mod. This is to avoid having entire neighborhoods with people with long, hair.

I have a suggestion on making this mod even more, where do I leave that suggestion?

Please post your suggestions while this mod is in Development, in our Discord channel - #organic (https://discord.gg/x6bFyNT) I

What other features are you looking to add to the addition?

We have a few additions we plan on looking into, which are listed below. However, if there's great interest in this and Patron requests for certain features to be added we will look into adding more in the future.

Languages included in this mod can be found in the "MORE INFORMATION" section below.

If you are experiencing this issue with this mod, please head over to our Discord server channel: #simrealist-mod-support (https://discord.gg/W8Erfqu).

The mod is unfortunately not very vampire friendly.

The "opening hours" are outside the times when a vampire can move halfway without being burned by the sun. (Not every player uses sun residency. I lost my master vampire because of this mod!)

1.) Realistically, many shops especially in Europe where I live are open until 20 or 21 o'clock. America around the clock? 6:00 p.m. is just too early to close. Better opening hours are 9 am to 9 pm. ("better" for vampires in this case) Besides I don't know any hairdresser who is open at 6am :)

2.) When a vampire goes to the hairdresser, the character only becomes invisible, but he still stands at the "spawn point" while the sun kills him. The mod should give the character an invisible sun resistance buff before he "disappears" and remove the buff when he is done with the hairdresser. That would solve the problem I guess.

3.) Keep in mind that vampires have a negative buff that you can choose to give them that makes them very vulnerable to sunlight. So that these players (like me ^^) can also benefit from the mod and don't lose their characters all the time, you should think about changing something.

Edit: Oh almost forgot: it would be great if you could turn off the hair growth for a special sim. My aliens are all eggheads that shouldn't have hair growth (I think that makes the races more interesting when each has something that the other doesn't have. If everyone runs around with a bush on his head there is no more variance in the game)

Hi. This mod is really great. Is there a way to make the hair grows faster? thanks!

There's a hidden trait that each Sim randomly gets that makes their grow slower or faster than the normal growth rate. Sounds like you have the slower trait. 😉

I downloaded this and the only option my sim has is get hair dyed. Is this a common glitch? I eve re downloaded it to see if it helped and nope.

Haircuts are available when the Sim has Overgrown Hair or Too Much Hair buffs. If they are not in that state, then the only option would be to Dye their hair. Read more in the mod description.

Hello, I just translated your brand new SimRealist mods - OrganicHair_0.1.0.3 into French, here it is to download on this link:

i don't find it

I'm so excited about this mod! I just hope my laptop can take one more.

Can we choose the color when dying the hair? Or is it random?

Do you have any plan related to body hair( legs, chest, facial, etc...)?

And are custom hair compatible?

-Color: Right now it is random to give the feel that the Sim choose (free will you know?) but we plan on adding a custom option next year.

-Body Hair: Right now we plan on focusing on treatments, at-home interactions and services but yeah we can add that for future considerations.

-Custom Hair: Yes, if the creator appropriately tagged the texture, color and length. If it isn't fully and correctly tagged, your Sim's hair will not revert back to the cc hair once trimmed.

Awesome! I can't wait to play with it in my game. Thank you for the superb-work and the fast answer.